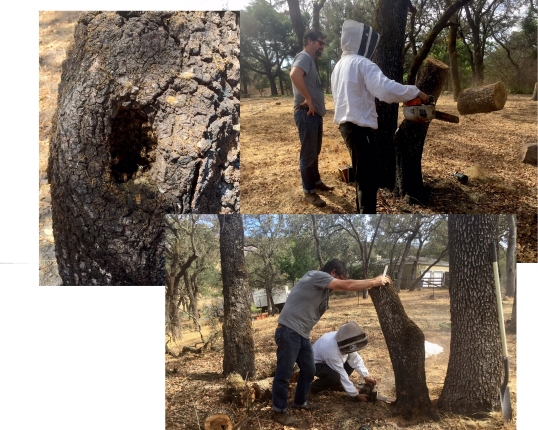 One Year After The Firestorm

As fate would have it, it took a dedicated team of Architect, Builder, Permit Liaison, and owner exactly one full year to finally receive a building permit to rebuild our home lost to the October 8, 2017 fire. While that is frustrating, gratifying, and maybe surprising, there was another lovely miracle (besides our beloved cat Jimmy Topaz rising from the ashes after 6 days). We had a bee rescue!

There was still a robust hive of honey bees in one of the Oak Trees that stood nearest our house. We had known of the hive before, but this was one of the trees that burned hottest, and did not survive. By Providence, the opening to the hive was on the side facing away from the structure, so fire did not enter the tree. We realized that bees were thriving after the fire, as if thousands of acres of plant life had not just been erased around them. We hired arborists to remove a dozen trees— while trimming the remaining will be an ongoing project. In so doing, we were faced with the property rights of honey bees. So we called the bee man! 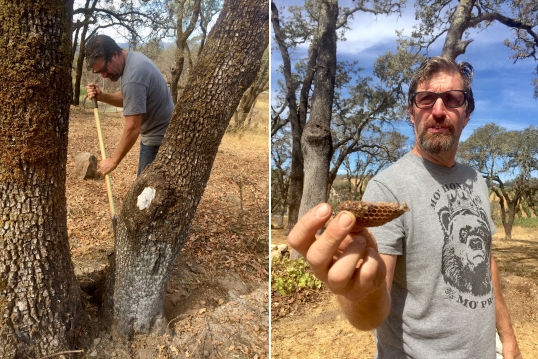 Bee expert Rob Keller is devoted to Napa Valley’s bee population and is an activist for them. He is The Napa Valley Bee Company. Eager to come over and assess the hive, it surprised even him, who sees so many, by its size. They lopped off the top of the tree at about 7 feet, saving the base for him to inspect. He determined that the hive extended almost 6 ft, from 5 feet above ground down into the roots below soil level, and he observed a colony of beautiful, wild “heritage” honey bees. He wanted to remove them to safety, and place them where they would mix with domestic bee colonies “farmed” in the County, to strengthen the gene pool. 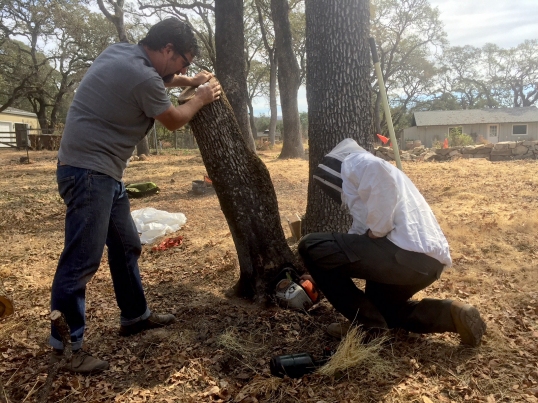 To move bees, one must trick their mysterious GPS systems or they will get disoriented and exhaust themselves trying to return to their home hive location. So, Rob sealed the cut top of the trunk with a towel, and waited for dark of night to move them, when they would not struggle to return. He needed to move beyond a 3-mile radius— a distance that “re-sets” their navigation system from base camp. To get ready, the tree was dug out below grade, and cut, but propped up until the men could carry the heavy segment of tree trunk containing the hive to his truck, for transport. Amazingly, throughout this work Rob wore no protective equipment. Working together with Rob were jolly colleagues, the arborists of Pacific Tree Care, who were so gratified by the effort to save the bees, since the hive would otherwise tragically go into the chipper. They, however, suited up as apiarists for the maneuver! The last chain saw cut below ground was “blind” and accidentally sliced a bit of honeycomb, which was indeed oozing with dark, golden honey. The cut was not fatal. Rob pointed out another little miracle: the tiny tunnel just one bee high, into and out of the bottom of the hive, was between two roots under the ground, and so fire did not enter the hive from the bottom!

After sundown, off they went into the night to a new Napa Valley home. Rob Keller is a hero. A Hometown Honeybee Housing Hero. We think he’s the bee’s knees.